Tetchta Member Posts: 701 ✭✭✭✭
July 9 edited July 9 in Harpy's Head Tavern
This is kind of a weird post, and I’m going to do my best to be concise, but I will probably fail, so bear with me.

When I first came back to the game, Aetolia seemed a lot less toxic than I remembered. This was, of course, an initial impression fueled by limerence and pretty stark memories of how openly horrible people used to be to each other. And in many ways, this impression was decently correct. The entire IRC Mafia era seems to have ended, as has a lot of open hostility.

But it’s an incomplete impression, and after having been in the community now for, off and on (it’s not me, it’s you) about a year and a half now, I think I’ve, after many bumps and bruises through the way, finally gotten a bit of a grasp on the current state of the community, it’s issues, its toxicity, and how we should possibly be addressing it.

Before I go on, though, let me ask you if this sounds familiar:

Someone, apropos of nothing, posts something. Something vague. Maybe it’s an entire thread titled something vague like The Reality of it all… which contains several paragraphs, or maybe it’s just a simple post in Mildly Irritating comprised of just a few lines; in either case, the contents of the post are entirely vague, borderline nonsense if you don’t know the full context. And you think to yourself “what on earth is this about? Is this about me? Is this about anything at all? Someone I know? An org I know? WTF is reality?”

Sometimes there’s clarifications of some kind. More often than not, however, the context is lost to the wind for all time. This can be particularly alarming if the original post seemed to be about something quite harrowing or severe. “Is someone being abusive? Is there something I should be worried about?” you ask yourself. Maybe you reach out to people you know who may know more. Maybe you learn something. Maybe you just get static. Or maybe someone posts screenshots clarifying the context, or references a log that has become ubiquitous. Or maybe you just float on into the ether forever ignorant.

Why am I bringing up these scenarios? Because I think they’re probably something we’ve all experienced in one way or another. They should be relatable. And they’re important to look at more closely because of what all of these things are: echoes. Echoes of an event, of an action, of something someone said, of hurt or distress caused. And, generally, I’d say that 9/10, maybe even 19/20 times, this is all we ever see: an echo. An echo of something that happened in the dark that stays in the dark.

Well, I’m here to take the stance of “maybe we should stop letting things that happen stay in the dark as a community.”

Aetolia is a small group of people, all said and done. True secrets are incredibly rare, and things spread like wildfire. I think it’s safe to say that, while the above situation I laid out remains true on the forums, that 19/20 things remain in the dark, this doesn’t mean that they remain secret. Aetolia has a surprisingly diverse and interconnected web of whisper networks and, generally, not much goes on that you don’t hear about, if it’s big enough. And in a lot of situations, whisper networks can be very effective; but there’s one thing that they’re very, very, very bad at: encouraging personal accountability.

If I do something to you, like, say, metagame with others to get you punished ICly by planning the entire thing OOC, or say something exceptionally nasty about you in a web while you’re not online (or just aren’t a member of that web), and it gets back to you, and understandably upsets you greatly--well, that sucks. So what’re you going to do about it? Make a vague post that’s like “I hate when people conspire OOCly to ruin my time online

“? You could. But what does that do to me, even if I know it’s about me? I’d argue nothing. I read it, have a good chuckle, go to my confederates and say “haha, look at this post hahaha” and move on to keep doing what it was that I was doing, consequence-free, reputation intact. Even if a bunch of other players also know I did it, it largely doesn’t matter because I wasn’t forced to address these things publicly, so there’s always going to be a niggling doubt.

Or think of it the other way around:

You think I did something like the above scenario to you, make the post, tell your friends, and everyone you talk to knows it’s about me, except for me. Then my reputation ends up tarnished without me being able to really do anything about it.

Ultimately, this pattern helps nobody.

There’s lots of reasons the community model is the way it is. Rocking the boat is uncomfortable. The facade of tranquility helps ease that discomfort for a lot of us. It’s also, generally, against the rules to talk about these sorts of things publicly; generally, the onus is on the bad faith actor, or someone who did a crap thing, to come forward and say “hey guys, I did a bad.” How often does that really happen? And, the thing is, these facades of tranquility don’t come without a cost: they allow bad behaviors to continue unchallenged, and what’s worse, they sacrifice the victims at the altar of peacekeeping.

There’s also an entrenched attitude among some people that exposing these sorts of things, even into the whisper networks, is itself somehow worse than the behavior being exposed. I’ve spent a long time trying to dissect why this is, and I have a few theories, some charitable, some less so: This post may come across as me saying “we should name and shame people all the time” which isn’t my intention. That said, I do think we are all too ready to just ignore the crap said in toxic discord servers, or in the “heat of the moment” in our webs, or wherever because having the conversation openly causes a degree of discomfort to us that we don’t want to handle. And I do think that by allowing these issues to go unaddressed, they are likely to just remain a problem, and lead the subjects of these events and the perpetrators both less-well-off than they otherwise would be. I can’t tell you the number of times I would’ve been relieved to hear that some thing that someone said about me was taken out of context or was reductive. Or the number of times I wish I hadn’t felt alone when it felt like a ton of people were against me, even though what they were doing was clearly wrong.

I know some of this is filled with a lot of the vagaries I rail against, but I’m also not particularly enthusiastic at the prospect of getting banned again any time soon. But I know that someone recently got an admin warning for even referencing a log that recently spread (Hi! I spread the log! And I don’t feel bad about it

) even though a lot of the behavior in that log was repellant and way worse than saying “hey what you were doing was uncool, Person A and Person B!” And that doesn't really sit right with me, and I think we should talk about it, and also be more free to talk about things going on in the game that are toxic and/or harmful (even if we're wrong about it!)

But, hey, now I’ve laid my cards out on the table, failed to be concise (lol 1.9k words), and am now open to being contradicted! Have at it!

P.S. since I wrote so much I likely won't be taking the time to rebute your rebuttals so feel free to go nuts.
"We're taught Lord Acton's axiom: all power corrupts, absolute power corrupts absolutely. I believed that when I started these books, but I don't believe it's always true any more. Power doesn't always corrupt. What I believe is always true about power is that power always reveals. When you have enough power to do what you always wanted to do, then you see what the guy always wanted to do."
-Robert Caro
Post edited by Tetchta on July 9 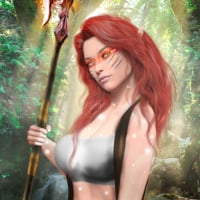