Warhound Breeding is Hell: we need to fix it

Tetchta Member Posts: 465 ✭✭✭✭
February 11 in Idea Box
I'm going to try to keep this as concise as possible because there's a ton of complicated factors that go into warhound breed in the Carnifex class, but with MirrorCarnifex on the horizon, I think it's time that we take a look at how absolutely bloody broken breeding mechanics are. We're about to have an entirely new group of people hitting the breeding mechanics with literally nothing to start with, and it's going to dramatically show off the warts of this process. Also I would've made this a classlead but someone decided that we should get only one classlead submission after waiting six months.

For PVP, breeding isn't a huge issue because, worst case scenario, you can Soul Pact your hound. This makes them unbreedable, but you can freely retrain their abilities to tweak them if you get a hound that's near-perfect (although this does cost gold). Being transcendent in Warhounds is a requisite of this ability, however, and so it's not open to everyone directly out of the gate.

The problem comes to establishing a breeding pool with the right traits initially, especially when it comes to hounds that are meant for PVE.

An important part of Carnifex guild culture is to give away a perfect hunting hound to novices. The correct combination of traits in a hound is a dealmaker for bashing as a Fex, and can greatly increase your survivablilty. Hounds that are bestowed are naturally disobedient, but this is not a problem for PVE hounds because all the abilities are passive, not active, so obedience isn't a problem.

Getting even one breeding pair, however, is presently a task that is so phenominally stressful that it's frankly amazing that it's been untouched for so long. I've been trying to establish a new strain of hunting hounds with a unique coat for...well, off and on a year, but I think I've sunk about one IRL month into this endeavor and accomplished almost no headway for weeks. I've not produced one viable hunting hound in the entire experiment.

As I understand it, here's how the mechanic is supposed to work: This is what we think the mechanics are, but this is not the experience I'm having. This is my latest batch of puppies, wherin two breeding pairs were perfect hunting hounds (meaning I should have at least gotten one viable hunting pup with no negative traits), and the rest were unideal combinations, but still should've had a chance of losing a negative trait: 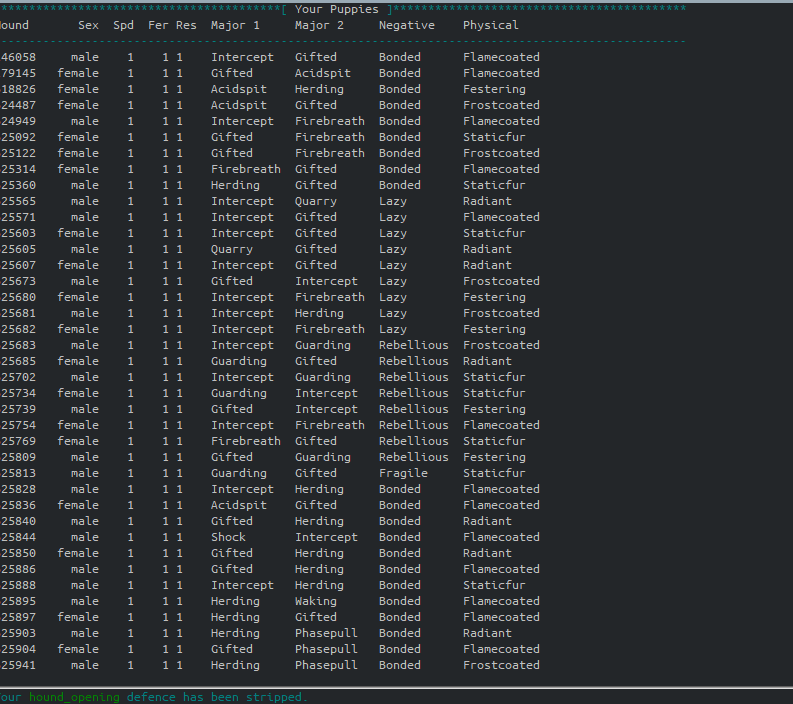 None of these things happened--negative traits down the board. And keep in mind this is basically what I'm met with every howling, for the past several weeks. Either something's broken, we're mistaken on the mechanics, or I'm extremely unlucky to a level that's bordering on absurd.

The thing is, I've been hammering at this for weeks, dealing with the disappointment, while I already have a decent pool of hounds to draw traits from. Meanwhile, Spirit is about to get MirrorFex out of the gate without this benefit, which means we're about to have a dozen(dozens?) of people trying to get viable hunting pets and getting extremely and, frankly, justifiably frustrated at how it works.

This really should be addressed. As it is right now it's basically a reverse gacha game, where instead of being an addictive and rewarding kind of randomness, it's completely frustrating and maddening, with each day becoming less and less fun as your results are slow and unrewarding, and as far as I know there's no other class that has to lock itself behind this hellish grind in order to enjoy the very basics of their class.

Proposed fixes: Seriously, guys, this is bad. Please fix it.