WANTED: Son of Aren and Akarn Yaslana
What we are looking for:
We are very roleplay heavy, and the opportunity for wild and crazy ridiculous shenanigans is high. You must be able to roll with occasional dark themes, drama and randomness, and we will be going through something of a vetting process for a regularly active alt player. There will be a short probationary period before full approval.

The character’s backstory is fairly well laid out, but there is some room for flexibility that can be discussed before play begins. Age is also flexible, but likely early-mid 20’s. He is a male Atavian, honey eyes, blue and black hair, olive skin with black wings. He was delivered to them from a surrogate mother, Aniko. There is much drama in the manner in which he will be introduced into the game, and that will be discussed beforehand.

The son is artistically inclined with decent skill, raised by shifters outside of the city of Spinesreach. Likely also a shifter, but what kind is up for debate. Fathers are wolf and crocodile shifters, so leaning either of these directions is encouraged.

Heavy preference for a living shadow-aligned class. Aren and Akarn are both Carnifex, and have been for a good majority of their son’s life. Other encouraged possibilities are Syssin, and Sciomancer so that Spinesreach is his home city like that of his fathers.

What comes with the gig:
(2) No-Brainer lesson packages
Private room in a large player house
Getting spoiled by parents!
Wild and crazy shenanigans!
Help in reaching endgame, if needed

Please reach out to Aren on Discord (Aren#6373) for further conversations between everyone involved. 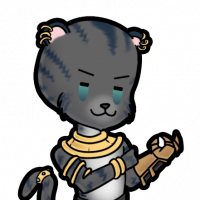