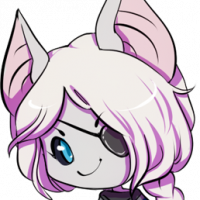 Nisavi Member Posts: 168 ✭✭✭
March 2020 edited March 2020 in Roleplay Logs
'lo. This is my first roleplay log! While it's a short one, it was nonetheless a very unexpected one as my character was merely shopping around for other things. Thank you @Roux for the spontaneous and enjoyable RP!

Nisavi's desc:
She is a wise Grecht and utterly waifish in terms of immediate appearances. Her thin, almost malnourished form is covered in dark grey fur that is both clearly unkempt and dishevelled. Upon her head are two large ears that protrude from a midst of long, albeit messy white hair. Wide eyes the colour of pitch are set above a small protruding snout. At the end of her gangly arms are long black claws that have seen better days, each nail caked with some manner of dirt or unidentifiable matter that is perhaps best left unknown. A tattered membrenous film connects the bottom portions of her arms to a midpoint at the sides of her torso, a common trademark of her race. At the very end of her short form are two long narrow feet, the bottom padding of which has been cracked, bruising, and rusted with what could only have once been blood.

(hanging from the shoulders) : an extremely long striped scarf
(hooked at the base of her long ears) : drop earrings of twilight's tears
(adorned in a scarcely fitting manner) : a painted eye robe laden with charms
(dangling from a bony wrist) : a twisted, black leather bracelet

I unfortunately lost Roux's desc in the buffer! Sorry, Roux!

Roux offers a slim smile, one hand lifting in gesture. "Consider yourself welcome to do so." Roux leans forward against her bar, tail curling up behind in an idle flick as she watches you peruse the store. "Let me know if you're looking for anything in particular." She calls in a friendly manner.

Nisavi answers by bounding on all fours towards Roux in a swift, sudden manner. The creature rises to her feet and stares upwards at the Yeleni and tilts her head curiously as she simply states: "Food."

Roux pushes back from the lean and rounds the bar to head to the food counter with a beckoning motion of her hand. "It's this way, dear." Sliding behind the counter, she taps her fingers on top of the display. "Looking for meat? Fruits? Something sweet perhaps?"

Nisavi returns to all fours as she scrambles towards the display itself and, finally catching sight of all the various fare, her pitch black eyes widen in absolute astonishment. She darts
her head left, right, up, left, right, and various other directions as she sets her attentions on each option as if she had never seen such offerings ever. "Did... did you make these? Find these? Nisavi is curious."

Roux spreads both hands along the top, having to lean forward a little more in order to see her diminutive guest. "Aye, these are all of my own recipes. A little something for everyone, I think, no matter what your tastes lean towards." Her nose wrinkles and an amused grin touched her lips. "Or I hope so anyway." Her gaze takes your youth with a considering look before the smile returns. "Let me treat you to one? Any of them, just pick."

Nisavi's mouth goes agape at Roux's offering, as if the very concept of such generosity is absolutely alien to her; yet, there is nothing in the way of hesitation as the grecht looks once more at each offering, affording each a lingering, reluctant gaze before turning to another offering. Finally, she seems to settle upon the peach pie and raises a thin, bony finger towards it. "Nisavi would like to try this, yes?"

With a nod of her head, Roux crouches behind the counter and pulls out one of the small pies, humming briefly to herself as she arranges the rest to fill the empty spot. Coming back to her full rather insignificant height, the Yeleni rounds the counter to hand the pie off instead of making you reach for it. "Here. Nisavi is your name?" she asks, holding the pie out in offering. "I'm Roux Aquila. It is lovely to meet you."

Nisavi clambers to swiftly take the peach pie into her possession as she skips the exchanging of formalities altogether to take the peach pie into her small hands. Barely restraining herself at first, she tears nto the pie at the very center and takes a few pensive bites before her entire face lights up and the creature's face turns into something akin to ecstasy. Like a beast that has taken the first bite of wounded prey, Nisavi begins to messily tear into the peach pie, making sounds of what can only be utter delight as she continues to waste little time in devouring every crumb. It does not take her long to finish the whole thing and lick the entire pan clean of every crumb and bit of peach that she can find. Without warning, she leaps onto the counter itself and brings herself to Roux's eye level, her face leaning in with little consideration towards personal space. "Roux, Roux," she says a few times, as if committing Roux's name to memory. "Roux is kind. Roux is true food maker. What was it that Nisavi ate? Nisavi must know."

Roux winces faintly, mostly at the unkempt nature of the young Grecht, her mismatched gaze traveling around that small form, tail flicking with what might even be ire. She has plenty of time to sort that useless emotion away though, and is wearing a proper, amused smile by the time the pie has been fully devoured. Jumping slightly at the sudden close proximity, the Yeleni chuckles and with a quickly renewed sense of calm, says "It was a pie. Peach, to be exact. I find pies to be my preferred dessert of choice, so I'm glad you enjoyed it." She doesn't pull back, letting you claim her personal space without concern.

Nisavi turns to withdraw from the counter and, once she reaches the base, turns once more to stare at the other offerings of peach pie available. "Peach... pie," the grecht murmurs, as if once more committing such words to memory. "Nisavi like peach pie," she affirms, nodding her head twice as if this were to somehow reinforce the point further. Taking her pack into her hands, she begins to rustle and fuss with the contents inside before unearthing large handfuls of sovereigns, clearly way more than the asking price of the pies themselves. "Will this suffice for another peach pie?"

You give 62 gold sovereigns to Roux.

Roux leans in, tapping a single finger against your cupped, gold-grasping hand. "More than enough. I'll give you a discount, for giving me such a nice compliment. One pie lover to another." She says with a small wink. "Just one? I'll trade you fifty gold for it."

Roux takes a moment to make a show of counting, her lips pursed, fingers sliding amidst the coins. "Hmm... seems you've given me too much. Far too much. I suppose I will have to trade you two pies for this." She says, a note of decisiveness in her tone as she moves to pull two more pies from the display case.

Nisavi gives such a resoundingly loud screech of excitement that betrays her barely restrained joy. "Roux is kind. Kindest person that Nisavi has ever met, yes!" she exclaims, taking both pies into her possession with as wide of a smile that she can muster. "Nisavi gives thanks. Many, many thanks to Roux, master food maker!" The grecht pauses only for a moment as if an idea had occurred to her suddenly and the room grows slightly dark as the girl appears to be channeling something untoward.

You open your mouth in an exaggerated fashion, as if to scream aloud. Instead, a black morass of insubstantial matter flows out of your throat, coalescing before you in the form of an impish shadeling.

Rippling, bubbling, and stretching, an inky shadeling warps and morphs out into a mimicry of Roux.

"Thank you! Thank you!" Nisavi says once more, bounding off towards the rest of the city with pies in her clutches as her shadeling, now an eerie resemblance of Roux, follows in pursuit. 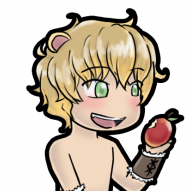 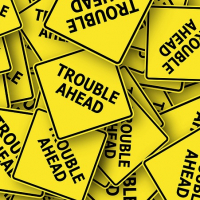