Later in Khepary, 481 MA, a resolution came to the previously detailed events that had occurred earlier in the month:

The Shadow Mark began to chill Tatia, the Shadow Warden in an odd premonition; it was trying to warn her about a dangerous misuse of shadow. Cryptic hints flashed through her mind: Somewhere in a jungle; a ruin; Rajamala; and the word "Ati". Citizens of Spinesreach gathered and rushed to the ruins of Farsai where they found the three missing Sciomancer prisoners that had broken out of their Ironmaw Prison earlier that month. A quick scuffle between the two parties ensued, ending abruptly when the Goblin, Nogvert, allowed his compatriots to flee. No sooner did those two portal away before he immediately surrendered to Warden Fezzix, begging mercy as the man held him tight in a deadly noose.

Nogvert claimed the other two, Rubanzin and Twilleri, were part of a cult and forced him to help their plans. He merely wished to escape his centuries of imprisonment in the Ironmaw and took an opportunity when it was found. In exchange for being placed back in his cell, allowed to live, he swore to reveal all they had planned. Once more, Nogvert found himself returned to vaunted interrogation rooms of Spinesreach, located far beneath the Ironmaw Prison. As the questioning began, Nogvert's story quickly began to pour out. He seemed to agree to anything that diverted blame from himself, all while he developed a horrible, quickly worsening, cough. His belly distended and he burst open, spraying the room with viscera and shadow creepers, which quickly spread throughout the Ironmaw.

On cue with this distraction, a muffled boom rippled through the Citadel. Later investigation showed that a saboteur had successfully destroyed a monolith sigil protecting one section of Spinesreach, and soon the telltale, high-pitched keening of a sonic portal rang through the streets. The northerners rushed towards the citadel to find Rubanzin and Twilleri, now marred with the curse of the Shadowbound, pairing their efforts in order to rip a hole through time and space itself into Czjetija: the creation of a singularity. Drawing upon far more from the Shadow Plane than a mortal could safely wield, the two expanded the size of the singularity, feeding it until it reached a point beyond control and even they were caught and consumed within it.. Unstable, the singularity reached a state of critical mass, now completely self-sufficient and able to grow at a slow, inexorable pace, without aide. It would continue to expand, devouring anything and everything it came into contact with.

The Citadel began to shudder uncontrollably as the gravitational pressure exerted from within the depths of the growing singularity began to tug at the supports of the ancient building. The Lord of Artifice arrived upon the scene and, after a brief assessment, ordered those Archivists present to reinforce the infrastructure with their numerological arts. Those Archivists, Arbre and Kanivara, settled their focus deeply onto Rafic and Jhako and began to continuously reinforce the weakened points around the Citadel. As more Archivists began to awaken, they too began to lend their support alongside the original pair.

After a failed attempt to dismantle the singularity by Himself, Severn quickly grew frustrated and drew Umbrael, the cloak of Midnight, across His shoulders. Foregoing His usual care, the Immortal began to hastily wrap the singularity with layer upon layer of shimmering, opaque Artifice, intent on denying it the reality of existence. Calling upon the growing ranks of Sciomancers, He quickly explained that His layering of Artifice was only temporary, and that He would need their help specifically in order to properly dismantle the singularity. The groans from the Citadel began to grow louder as the gravitational force continued to increase.

Before Severn was able to fully explain His plan, the planar fabric began to bend inwards on itself as the gravitational pressure became too much and rifts to Shadow opened around the Citadel. Though these rifts began as only small openings into the Plane of Shadow, various creatures of Czjetija still managed to squeeze their way through. Fezzix Sicarius, long experienced in battle against the Shadowbound, immediately gave out commands to the Syssin even before Severn could issue His own. The Syssin, including the General Robyn and Mariena were quick to heed Fezzix's commands, using the powers gifted to them by Severn to banish the denizens of Shadow. Joined by Louse, Diancecht, Evilo, Tina, Tirria and other allies of Spinesreach, they fought tirelessly against the creatures of Shadow that poured forth, intent on buying time for the Sciomancers and Severn to put their plan into motion.

As the singularity continued to chew through layer after layer of Artifice, Severn hastily laid out the decision before the Sciomancers. Down one road led the abandonment of the Citadel, and possibly Spinesreach, in order to more strategically plan out the neutralization of the singularity. The other option, however, carried a far greater risk, both to the Severn as well as the Sciomancers. The Shadow Warden Tatia was the first to speak, making an immediate decision to stay and fight to defend her home. Her voice was quickly joined by the other Sciomancers gathered, each declaring their conviction to save Spinesreach from this rapidly growing threat.

With a grim countenance, the Manipulator declared that He would anchor more of Shadow to Sapience, allowing the Sciomancers a greater font of that particular elementto draw from. As the conduit of Shadow into Sapience, Severn explained that He had previously been allowing only a fraction of Shadow's power to be accessible, as too much would prove harmful to those who wielded it, all their wills at risk of eroding away. Even with the dangers laid out before them, the conviction of the Sciomancers remained absolute.

Preparing to enact this feat, Severn called upon His Brother, Bamathis, who soon joined His Spymaster's side. Anchoring more of Czjetija to Prime, with Severn as its conduit, placed the Lord of Shadow at greater risk to Ohlsana's influence, and He realized the need for a stalwart safety measure should the worst come to pass. For only Bamathis, He felt, possessed the disposition needed to immediately execute Him should He succumb to the Shadow Mother's clutches.

Before Severn could begin, Damariel, the Unbound, descended upon Spinesreach with righteous fury. The two Twins nearly roseto blows, Damariel insisting that saving one Citadel was not worth unbalancing Sapience, and Severn insisting that Spinesreach was too valuableto lose. Bamathis ended the stalemate by declaring that no more ground would be given, and whatever must be done would be done. With the Warlord holding Damariel at bay, Severn left His Twin with a cryptic reminder before returning to the task at hand: "Brother, remember what I told You before We faced Jox. If I fall here, You -must- carry that on. Without fail."

In an instant, the darkness of night lurched outwards all around, growing more oppressive as Severn began His task, widening the bridge between this plane, and that of the Czjetija. Suddenly, Severn's back arched inward unnaturally and tiny droplets of Shadow began to bleed from His eyes,, the dark fluid leaving stains in reality as they fell to the city below Him. In a cracking, sibilant voice not His own He shouted in an ancient tongue, "Hyst, rilijes, jilacz mejn Olsana Mizra-Kitivav Etolijat nyv!"

Without hesitation, Bamathis drew His blade, declaring Severn's battle of wills with Ohlsana was lost - She now spoke through Him in the ancient tongue of Czjetija. As He swung His sword towards Severn's neck, the Lord of Artifice snapped back to self-control as suddenly as He had lost it. Though surprised at the sudden change, the Warlord stopped His blade mere inches from His Brother's neckand sheathed it once more.

An intoxicating rush of power flowed through the Sciomancers as Severn finished His task and the change in balance was felt immediately. The swell of power briefly overwhelmed some of them, and even Nevithor, the Shadow Tutor, lost his composure to it. On the other side, however, the Ascendril felt their elemental channels begin to buck under their control. Though it was a simple act of will for them to steady their hold on the elements, a feeling of wrongness followed. A sickness came upon them as they drew upon the elements, as if the flows they carried brought alongside it a waste, an acid, that ate into their metaphysical form.

A wearied Severn gathered the Sciomancers and those trained in their arts to His side once more and directed them to use the greater pool of Shadow now available upon the singularity. Tatia, Emir, Nahira, Neytiri, Skiva, Mazzion, Zhukov and Evilo began to tug at the singularity, enacting the pact of the shadowprice to heighten their powers to terrible, dangerous levels. Severn pulled the master crystal of the Sciomancers to Him and bade the mages to let the crystal leech the growing debt they owed to the shadowprice from their bodies. Still, many of the Sciomancers perished as they greedily drew upon too much Shadow and the health of those remaining continued to rapidly deteriorate.

After much effort from the Sciomancers, the singularity steadily shrunk in size until its radius became an insignificant speck of obscurity. With a final thrust from Severn, it collapsed, many nearby mortals dying from the explosive release of energy. Despite the loss of life, the threat was now gone.

As the Master Crystal absorbed the remaining debt from the Sciomancers that yet lived, a peculiar change overcame its features. The leached shadows within it rippled across its form, obscuring the Crystal in a tainted, obscuring miasma. Many attempted to refine crystals from the Master, but the crystals they drew forth were similarly tainted and remarkably toneless - producing none of the clear, resonating tones that once made them suitable for the art of Crystalism.

Though Spinesreach, and possibly Sapience as a whole, had been spared annihilation to an ever-growing singularity, the increased presence of shadow being let into Sapience was now greatly upsetting the delicate elemental balance, and its effects were being felt across the continent. It was not an act easily undone, explained Severn, comparing the act of reversing His actions similar in difficulty to swimming against a strong current. He would take care of it in due time, once His strength had recovered. For now, the pressing concern had been dealt with.

For the residents of Enorian, however, the imbalance was far more devastating as Duamvi began collapsing one by one in the streets - an increased density of shadow was anathema to their forms that already struggled to reside upon the Prime. Together, the Ascendril and their allies would soon take matters of the elemental imbalance into their own hands. 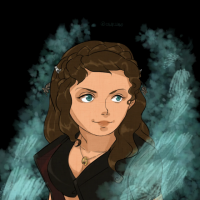