Aloli Member Posts: 339 ✭✭✭✭
March 2019 in Roleplay Logs
So much love for Slyphe for this because it happened at a very important time in Aloli's life when she so overwhelmed and just about ready to give up on life... the RP and conversation leading up to it was so touching and put her right back on track. Thank you so much

The lesson begins with Slyphe teaching her a lesson that she later translated into the monastery curriculum and that is: Water simply is - in a jar, in a river, in an ocean, it is, and it does, and it thinks nothing of what it does.


[traveled to the breakwater in Damariel's temple]

(Tells): You whisper softly into Slyphe's consciousness, "I am ready."

Slyphe looks around for a moment, familiarizing Herself with Her new surroundings, a wry grin slowly crawling onto the Goddess' masculine features. "Is this a prank, Abbess?" ponders the Divine, running a hand along the nearest surface.

You have emoted: Aloli takes a step to bring herself facing Slyphe. "I hope this is an appropriate place. I don't feel Father would mind...and it is a beautiful view of the ocean." She tries to contain her growing smile from becoming a giggle and shakes her head, "No..no..but I will follow You anywhere."

Slyphe smiles a moment longer, then returns His face to a dour, serious mask. Nonetheless, He acknowledges your words with a nod. "Well-chosen, Abbess - now, Do-san, if you would. Begin." His order is curt but not rude, merely the direction of a master.

You have emoted: Aloli had not practiced her katas in a long time, regardless of how well she knows them. However, she recognizes the instructions of a master when she hears them and she slips off her cloak, sets it aside, and takes a ready step.

You press your palms together and bow low, ready to perform the Form of Do-san.

Raising yourself until you rest solely on your palms, you unfold your legs and extend them straight up until you are performing a handstand.

You grab at the area where an opponent's head would be with your legs.

Flexing your powerful back and leg muscles, you rip your opponent to the ground by his neck.

Jumping up to your feet, you down-block to stop a kick from your grounded foe.

Cahirek Sattar strides in from the southwest, shield held in a comfortable grip.

You drop into a perfect split and bring your knife-edge hand down onto your opponent's throat, only to meet an imagined block.

Undaunted, you bring your legs together with incredible force and spring into the air.

Seeing that your imaginary foe is returning to his feet, you strike with an axe kick to the shoulder blade as you descend from your leap.

You quickly jump forward and throw an uppercut into your opponent's mid-section, driving his breath from him.

As you descend, you quickly assemble yourself back into a lotus position before you land. You have completed the Do-san form.

Pressing the open palm of your left hand against the clenched fist of your right, you bow respectfully to Slyphe.

Lapis lazuli beads glows warmly against your skin as it senses an approaching danger.

Slyphe crosses Its arms across Its broad chest, Its robe having fallen open just slightly to reveal the dense, compact musculature of a martial artist. The God nods, then sinks into a stance that is recognizable as Tekura, but certainly not taught in the normal doctrine. "As I would expect of an Abbess - I will now teach you My kata. Are you willing to be a student, Aloli Gallant?"

Cahirek Sattar sharply turns away, striding out to the southwest.

Slyphe sinks into the deadly, terrifying stance of the Kraken.

The earth around you suddenly starts to rumble.

The rumbling intensifies as Ellenia emerges from the ground.
She is followed by a grotesque obsidian and quartz golem.

[Ellenia immediately starts attacking Aloli before checking if anyone else is in the room!]

You see Slyphe concentrate for several moments, eyes shut in focus.
An outstretched hand seems to grip some invisible thing, then crushes it, delivering the Maelstrom's wrath from afar.
A Presence fills the room as the humidity grows, water gathering on every nearby surface. Ellenia's gut suddenly begins to distend as if it were too full, bulging in various places as intense pain crosses her face. Soon, every limb on his body is bulging like an overfull waterskin and, in a singular moment of agonizing pain evidenced by a loud scream suddenly cut silent, she bursts, coating every nearby surface in blood and leaving that as the only evidence of the Maelstrom's fury.

With a guttural moan a grotesque obsidian and quartz golem looks upward and then melds away into the ground.
Stricken, Ellenia collapses to the ground, a dense mist escapes from the orifices of her body, until nothing but a withered husk remains.

You give a pained sigh.

The world goes out of focus as your various afflictions are healed.

A shimmering curtain of multi-coloured light surrounds you for an instant as your wounds are healed by divine intervention.

You sense that Ellenia has risen once more.

You have emoted: Aloli steps back and watches Slyphe handle the annoying Ellenia with fascination. The display confirms her theories on the Maelstroms control on blood, a liquid. Still undaunted by her stalker, she wipes the blood off her face and bows once more then and explains her perspective, "I am always a student, always Your student as well." She remembers her musing note in the student records about Slyphe being her Teacher and Tekura master of record. Even though she is smiling and wiping the blood on her cloak, she nods again undisturbed, "I am ready to learn and I see now from my Do-San that I must continue through all the blocks I will face."

Slyphe nods, the blood from the unfortunate incident already disappearing by Her will, and instructs you firmly, "Mimic me as best you can, Abbess. This form is tremendously difficult, but I believe you are finally ready." Slyphe moves without any further fanfare, then - Her kata is fluid, ever-moving, blocking and striking as one, with no stops or 'hard' attacks. Rather, it seems more of a dance, at times agonizingly slow, at times lethally fast.

You have emoted: Aloli listens to Slyphe's instructions and when told of the difficulty she readies herself and returns a stern nod, accepting the challenge and what lesson it may teach her. "I will," she affirms and her voice carries the determination now growing in her as she begins to connect this training with everything in her life. She starts by standing opposite of Slyphe and as she watched she moved. Her fluidity becoming more apparent in each step taken. The delicacy or gentleness in the slow hand gestures do not betray the powerful energy contained within them. In a short time, she begins to memorize the steps of the dance and breathes through it as the wind blows across the two martial artists.

Slyphe continues to move even after the kata becomes tiring after the constant motion wears on the muscles and induces fatigue. It grows only more complex as times goes on, with swooping motions, ducks, even some jumps involved. Slyphe's voice, unperturbed by any mortal fatigue, remarks, "The kata is different for everyone who performs it - and you must perform it, not demonstrate it. It is the essence of effortless action." True to Her words, the God's motions flow together in perfect harmony - not a single block or strike is wasted, and She flows from stance to stance with liquid fluidity. "Be," comes the command once more.

You have emoted: Aloli closes her eyes while she moves and begins to understand the simplicity and complexity of this kata. She stops thinking through her steps, through any motions and lets herself simply move through the space. Her movements are more fluid than when she began, whether because she has grown tired or due to her living in the moment and simply -being- as instructed is a question not worth lingering on. Still, she continues to push through this as inspired by Slyphe's continued determination. There were a few twirls that brought her hands around her and a sense of freedom as she gently transitioned from one thought to another and let that emulate in her stances, in her dance. "I see," she opens her eyes and starts to actually see Slyphe again.

Slyphe eventually slows to a stop - the complex, quick, deadly motions of a sea in a storm slow to the gentle, calm waves with which the kata started. Eventually, Slyphe stills once more and remains perfectly so for almost a full minute before finally bowing to you, as deliberate as any killing stroke, and signaling for you to find the end to your kata, as well.

You have emoted: In the space of a few seconds, Aloli began to slow herself in deliberately controlled motions that seem as gentle as a ballerina. She ends her last stride in one stroke that brings her hands together to return the bow. Her breathing is labored as she returns to her full height. This session as refreshed her but she speaks less and thinks more, her thoughts entirely exposed to her master: I shouldn't think to face these problems head-on. That's wrong. I will move as I am moved and simply being, here, will be my example.


[Unfortunately mudlet crashed before I could save the rest! but he gave her last words of advice and an awesome belt that would allow her to perform the kata of the Maelstrom again. Meanwhile, Ellenia went to defile one of Slyphe's linked shrines to Duiran, Galadriel went to have fun killing her, I joined him after.]
Tiur, the Gnosis says, "To truly explode something, you have to learn how it was made." 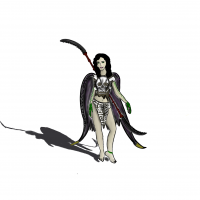