Group PK and YOU

Emir Member Posts: 386 ✭✭✭✭
June 2019 in Sparring Grounds
Just kidding, the following post is just about group PK. No one cares about you.

So, group PK at a large scale, large being anything over 3v3(MAYBE 4v4), is just about dogpiling damage. @Keroc has made a few changes that have /sort/ of effected this, the main ones being the addition of Wisp and Leer, and too a much lesser effect, the change to Dementia.

These abilities all break up coordination in some way, but they’re not fun to play against or challenging to use in a meaningful way. Sentinels order an animal to kill someone they want isolated, vampires just use one ability and then move on with their lives. The counters to these are some super intensive coding to track combat messages, users, and targets, or to very very quickly kill the thing/person who caused it.

Another change that was implemented and plays a role in group combat? Disperse.

Disperse is amazinggggggggg, and is fun, and you get a sense of accomplishment using it. Yay, I saved Mjoll from Stines overwhelm. Yay, I saved Benedicto from tearing Fezzix’s guts out with disembowel. Etc.

With these 2 things in mind I started coming up with some reasoning as to why one was fun and the other not, why one was insanely effective and the other was effective but not enough to change the entire flow of a fight, and how to recreate the feeling and effectiveness of Disperse. While brainstorming the first rough draft of these ideas with other players, it grew a little and I came to the conclusion that redefining our support abilities would ultimately fix this ‘problem’. Some examples are below!

(Please note, all examples of these changes would only be changes when the ability is used on another target. If used on yourself, they would act as they always have)

When used on an ally, shields them like normal, but also gives them a temporary ~20-40% damage resistance to all types of damage for X seconds

If the devilpact defense is active when this is thrown, it will also throw a Fool tarot alongside it. The Fool will only cure one affliction at random, but will incur no cooldown for class curing on either target.

If the Luminary has Angel Battle balance when performing this ability on an allied target, the Angel will reach out and aid in healing the targeted ally and remove one affliction at random. Similar as Priestess, it won’t incur a cooldown on class curing for either target.

“Wow Emir you’re trying to make it impossible to focus fire down one person.”

Yes. Precisely. Throwing in OP supports means that if you focus on mowing down just one person, then every person who has a support ability can just focus on keeping them alive. Combine that + natural hinder from those still running an offense + the persons curing, and it becomes much more difficult in killing that one person.

“But Emir, that just means whoever has the most OP support abilities is gonna win!”

Yes, if everyone follows the tactic up there, listed above. Whoever has the most support or the most damage to outpace the other teams support players will win eventually. But now you have options, options you didn’t have before, options that matter now and didn’t then. That little Luminary is pouring his heart and soul into keeping Stine alive, and our little Indorani that could is going through forests worth of wood in tarot cards to keep Mjoll up. What if one of them died? That would tip the scales?

“Goodpoint Emir. But now we just focus the supports immediately and then go back to wailing on each other.”

Now we have rotating targets and a system that is much harder to automate (yes Toz, I know it’s still possible), or we have split targets! The support abilities are gated by eq and balance just like everything else. If you split targets, then me shielding Mjoll isn’t nearly as effective, since 2 of you are hitting Mjoll and 2 of you are hitting me. Can I keep shielding Mjoll while I fend for my own life?

“Whatever Emir, you’re dumb, this is all dumb. It’ll never work.”

Well, that’s why I’m here. To present this idea to all of you and see what you make of it. I don’t think this idea ‘as is’ is going to fix all of our problems, but I think it’s on the right path. Please leave any suggestions, comments, or ideas below.

(Web): Toz says, "Emir's Express Evacuation and Existence Eradicator, Every Experience is Explosive - Experience the Entirety of your Existence!" 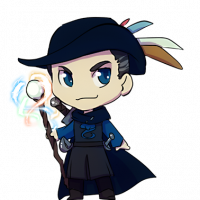