STOP TRYING TO GUESS WHO I AM

Ensidia Member Posts: 5 ✭
June 2018 in OOC Chat
I'm getting so very irritated with this. I've established that I hate forums, but I honestly don't know how else to say this. I came from Achaea and Lusternia. Period. The two characters I have in Aetolia are literally my first Aetolian characters EVER.


People seem so insistent on playing this ridiculous name-guessing game with me. I've been accused of being so many people in this game, and tonight I lost a very good friend to this dumb guessing game because he decided that I am someone named Larissa, who he apparently doesn't like and he decided to ignore me before I could even tell him his guess was wrong. I don't understand what the obsession is. It's like there are not allowed to be new people in this game? No one is legitimately allowed to just get bored with their old games and decide to cross over and test it out.

Please stop trying to guess who I am. The people I care about, I have told my one single alt, and he is also a newb like Ensidia, so there's literally no reason for me to even list him off.

The name-game is dumb, and it makes you look like a major butthole when you just decide in your head that 'this is 's alt and I am going to treat them like regardless of what they or the admins say." I am not Larissa. I am not Ansidia, I am not Teani, I am not Solaris, I am not Mordain, I am not Mimotesh, I am not Aren, I am not Moirean, I am not anyone else that you guys are assuming I am that you haven't even mentioned yet. Just because I've lived in the same city as someone. I'm sure everyone in this game has lived in the same city as someone else at one point. I am sure everyone else in this game knows someone that plays Magic the Gathering or Dungeons and Dragons or League of Legends or Warcraft. Just because I do these things does not make me that person. I am me, I enjoy playing games and having fun. I move around a lot. I have lived in many different cities and states.

I would love to keep enjoying this game with you all but you make it really hard when every time I do an RP or answer a personal question about my IRL (which I will not be doing anymore because you all don't know how to act), you're like OMFG I KNOW WHO YOU ARE. You don't. Only one person in this game knows who I am, and that's because we've been friends for 11 years and played Lusternia together for a good bit of that.

Thank you for reading another one of my rants. Please stop. 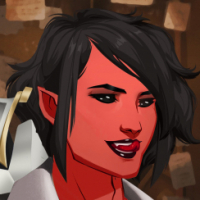